17. Covenant Kids, John Wyngaard Street in Strand: It all started with a very courageous idea! 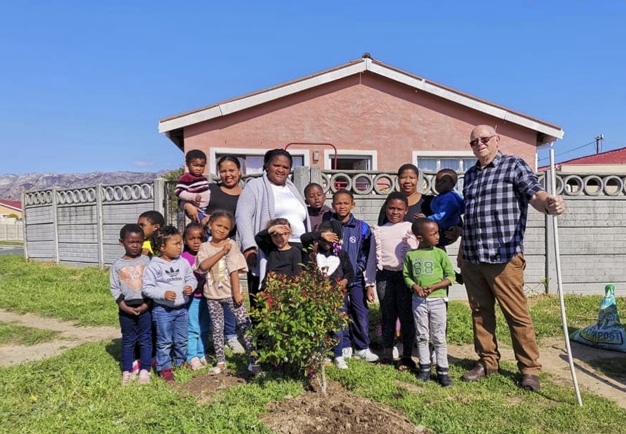 Covenant Kids is our newest kindergarten project that focused on a very courageous idea. The kindergarten was founded in 2019 and fully opened on June 1, 2020.

The courageous main actor is Chrizell Strangman, who gave up her secure, full-time job as principal of a facility in Sir Lowry’s Pass in order to fulfill a heart’s desire: She founded her own kindergarten, a beacon of hope and caring, as she puts it.

In order to fulfill her heartfelt desire, the Strangman family have cleared the newly acquired house in Rusthof near Strand and initially moved into a rented apartment. In this way, space was created for the care of around 30 children.

“Covenant Kids ECD Center” is a kindergarten that focuses on the individual development of children between 4 months and 6 years. In small groups and in a safe, harmonious and stimulating learning environment, children can discover and develop their individuality while they are being prepared for school. The children receive a healthy breakfast and lunch and, for a surcharge, computer courses have recently been offered for the little ones.

We were very impressed by Chrizell’s thoughts, her goal-oriented approach and her tireless commitment and diligence. She talks about her mission, her vision and her goals without losing sight of profitability.

In the meantime, the crowd of children has increased to 60 little girls and boys and an expansion of the house will be inevitable if one wants to receive registration and thus government funding. And of course Chrizell wants them.

However, since the property is not very large and the outdoor area is to be used for the children to play, additional living space can only be created by using the existing floor plan and adding another floor.

The Strangmans and their three children would like the building’s extension to be implemented soon so that they can return to their home. In addition to the security aspect – the house would always be inhabited and would deter potential burglars – thus, there would be many advantages if Chrizell and George lived on site with their children again.

We are very lucky that George Strangman is an architect and was able to plan the extension of the house. He has supported and advised Golden Sunbeams e.V. for many years – so we are a good team!

We would like to be able to support Covenant Kids in adding another storey to their home. Our goal is that Chrizell and George’s kindergarten will soon get the registration and thus also receive government support for its 60 children.